“IQ Integrity worked with our Verification Engineers to comprehensively plan the replacement of our legacy action management system and at the same time we developed a range of additional functions which enables Apache to make much greater use of the data we already collect.

Since 2011 IQ Integrity’s ONE has provided Apache’s Integrity team with an anomaly management system for the five Forties and two Beryl platforms, their subsea and pipeline infrastructure and, the SAGE terminal at St Fergus.

The Verification module was fully integrated as an extension to the existing system in 2014.

Apache’s independent Verifier was also involved in the development and approval process for the module.

Apache’s verification engineers provided training to all relevant Apache personnel and, following a similar 20 minute session, our Verifier was using the new module to input the details of their verification surveys to raise actions and to output reports.

Training offshore was done via Microsoft Lync calls which enabled screen sharing and this interactive approach was both timely and constructive. Since one of Apache’s core requirements was to have a ‘user friendly’ system it was very satisfying that all users quickly grasped the principles of the ONE system and found immediate benefits in their work activities.

Because the verification work scope, reports and actions are all integrated into one module, it has become very easy to manage everything in a single system without resorting to spreadsheets. The key benefits of Apache’s ONE system are;

The module is being further developed to increase the value of the collected data by providing a contribution to Apache’s risk picture. This will be in the form of analysis of the data with graphical outputs for;

The ONE system has been a step change improvement in our Verification and Action Tracking management and is from our viewpoint best in class when compared to other verification software tools.

No fuss, it just works.” 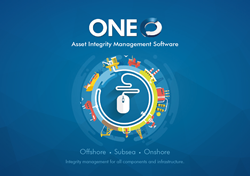